According to the forecasts of the 2015 FAO report, in the next decade would be necessary an increase in agricultural production near the 60% to meet the increased demand for the world’s people food.
Unfortunately the most optimistic growth forecasts are between 10 and 25 percent, while analysts who consider climate c 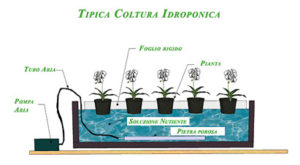 hange even think to a drop in production of more than 10 percent. If we consider that 80 percent of arable land is already in use, we understand that we must develop other natural growing techniques, which avoid the massive use of GMO products.
One of the techniques that you are trying to develop is that of hydroponics and aeroponics as its variant
The first examples of cultivation without ground date back to the Hanging Gardens of Babylon and the floating gardens of the Aztecs in Mexico. We must wait in 1627 Francis Bacon, who illustrated in his book Sylvia Sylvarum, some techniques for no land cultivation. Only in 1936 W. F. Gericke introduced the term “Hydroponics” for the first time.
The cultivation with water experienced a first development during World War II, when it was used by the US Army to supply the soldiers in the Pacific islands difficult to grow. Even in later years hydroponic farms were made in Iraq and Bahrain for the US military, and in 1952 production of food grown in the water exceeded the 3600 tonnes.

In the hydroponic cultivation plants are inserted in an inert substrate (expanded clay, perlite, vermiculite, rock wool, etc.) and are irrigated with a nutrient solution composed by water and by the necessary compounds. Each plant grown in the ground must continually develop its roots to seek water and nutrients, consuming its energies to the development of roots, instead of its higher growth. If water, nutrients and air are supplied d 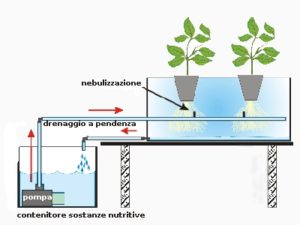 irectly to the plant, the energy saved allowing plants to grow much faster in height and with optimal performance.
In 1982, Richard Stoner developed a new technique hanging up plants and feeding them with a nebulizer. This technique, called “Aeroponics“, allows you to save up to 60% water.

In 1999 Dickson Despommier proposed research to his students at Columbia University, and led them to calculate how much food would be produced if all the roofs of the city of New York were used as kitchen gardens. After painstaking research and calculations the students concluded that the transformation in the vegetable garden of all the roofs 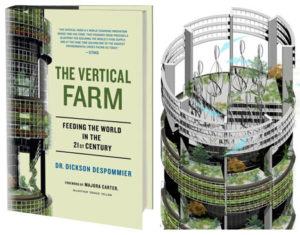 would cover the needs of just 2% of New Yorkers. The simulation was then extended to the hydroponic cultivation on the inner planes of large abandoned buildings. The calculations resulted that a thirty-story building, cultivated as a vertical farm, can provide food to at least 50 thousand people for a year. To feed the entire population of New York would need at least 150 of these buildings, but the concept of vertical farm began to assert itself and, with the integrated work of botanists and architects, has spread in recent years, introducing cultivable areas in different parts of the buildings.

Some kinds of hydroponic cultivation are applied in zero emissions areas, such as BedZED (Beddington Zero Energy Development) made in 2002 near London. To achieve the goal of zero CO2 emissions all houses are 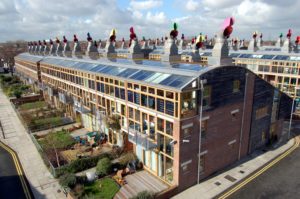 equipped with photovoltaic system and air flow vents that allow air circulation. Even rainwater and waste is purified and reused to irrigate plants and vegetable gardens, which provide much of the food self-produced by the inhabitants.
Other CO2 free areas, without use of fossil fuels, were made in Freiburg (Vauban), Hanover (Kronsberg) and in Paris (EcoZac).
Recently in the Chinese city of Dezhou it was built a new neighborhood entirely fueled by renewable energy, with wind turbines, photovoltaic roofs and walls, with the recovery of the waters that feed gardens and 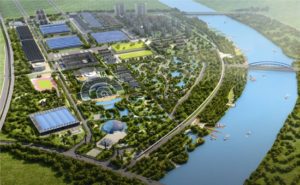 roof gardens, useful for isolating and refrigerate the environment.

This website uses cookies to improve your experience while you navigate through the website. Out of these, the cookies that are categorized as necessary are stored on your browser as they are essential for the working of basic functionalities of the website. We also use third-party cookies that help us analyze and understand how you use this website. These cookies will be stored in your browser only with your consent. You also have the option to opt-out of these cookies. But opting out of some of these cookies may affect your browsing experience.
Necessary Sempre abilitato

Any cookies that may not be particularly necessary for the website to function and is used specifically to collect user personal data via analytics, ads, other embedded contents are termed as non-necessary cookies. It is mandatory to procure user consent prior to running these cookies on your website.